We initially contemplated staying at a Lake Mead National Park campground just east of the city but ultimately decided against it not just because of the high daytime temperatures but also because of the lack of cooler nights.  Las Vegas lies considerably lower than where we were coming from so evening and night time temperatures wouldn’t nearly drop as much as at higher elevation. We didn’t realize just how bad it really was until we walked back from dinner that evening and it was still 102ºF at 19:40! I’m glad we went the hotel route.

Not having WiFi at the state park I went the lazy route and used an iOS app to find a hotel for our stay in Las Vegas. The Rio Casino just off the strip seemed like a good deal with a nightly rate of $36 plus a mandatory $28 ‘resort fee’ which basically gets you internet access and free parking.  What I had forgotten is that these hotels/casinos are huge and it’s usually a long hike to get from your hotel room to your vehicle.

This time was no different. We had to use the ‘bell hop’ for our luggage since they wouldn’t just give you a luggage cart to do it yourself. Oh well. The next annoyance was that there would probably be an early check in fee of $20 since we arrived  before the official 16:00 check in time – to escape the heat – ha! When I checked us in I explained our situation and asked nicely if she could waive the fee.  My charm must have worked because so far the fee hasn’t come through on the the credit card. Wait, maybe it was the fact that I was in full riding gear and sweating like a pig after I had just spent riding three hours in 100ºF heat and moving the motorcycles at slow speed to the parking lot 😉 .

Unfortunately, I wasn’t done riding for the day yet since our plan had us checking in at the hotel and then me setting off on my own to the dealership and grocery shopping. Once we were checked in and I had cooled off for 10 minutes I headed back out to the dealer who, thankfully, was only ten minutes away. It all went smoothly — picked up the part, went shopping and then back to the hotel. By now it was 108ºF outside and I was cooked.  Wait, it get’s better…

After again having cooled off and showered, we went outside to get more items from our bikes and I decided to try the part. It didn’t fit! We needed the part with an M8 screw but they had ordered it with an M10 screw which fits the later model years of Diane’s bike. Argh!!! All this effort for naught. I was NOT happy. Called the dealer and left a message for the parts guy. When he didn’t call back, I called again and discovered he left for the day before returning my call. Even more NOT happy.

We went through our options that evening. Option 1: The dealer acknowledges their mistake, apologizes profusely, and orders us the correct part with overnight delivery. Option 2: They say ‘tough luck’ and do nothing. We were willing to stay another night (different hotel though) if they corrected their mistake. To get the correct part number I called our BMW dealer in Albuquerque and got a different part number. When the parts guy with whom I originally placed the order called back first thing the next day I gave him the part number.  He looked it up but had to check with his manager for approval to order it overnight for us. About 40 minutes later he called back to let me know he ordered the part 🙂 .

We had already scoped out another hotel (Residence Inn) that I could book using my accumulated hotel points. Not only did it have a kitchen but they would also let us check in early without a charge. We had to be out of the Rio by 11:00 so by 10:00 we started packing up and loading up. This took quite a while given the distance to the parking lot and the fact that we didn’t have a luggage cart necessitating multiple trips. After a short 15 minute ride we were at the Residence Inn. Though short, the ride and unloading the bike was still enough to soak us through and through. Damn heat. 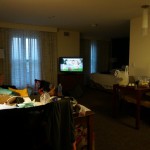 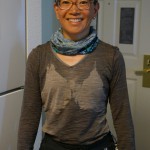 Las Vegas heat – after riding 15 minutes at 11:00 and unloading our bikes at the hotel 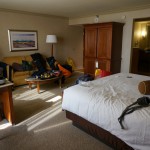 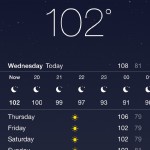 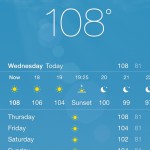