We needed good internet access to get caught up on email and our blog. After checking out the available campgrounds we settled on the “Hitch ’n Post” in Panguitch, UT as our destination for the day with plans to head to Cedar Break National Monument the next day. The campground was in the town itself so we could walk to the market and, more important, to the liquor store since we are going through cold beer at a breakout speed – I’m having a hard time keeping up with Diane who seemingly has a hollow leg. 😉

We arrived around 14:30 and picked a nice campsite in a shaded area. The campers next to us had a huge tent along with two ATVs, a dirt bike and a gigantic truck to haul it all. They had come down from Seattle for an ATV rally that was starting on Thursday.

We spent some time at the shaded picnic table and after getting caught up on all the electronic communication we headed to the state liquor store which we were told had a selection of “real beer” rather than the ‘near beer’ of UT. We didn’t find that the choices were any better and at $1.89 per can (that’s $11.34 for a six pack!!) I liked the selection even less so we passed and headed to the market instead. Even there it was $10.99 for a six pack which we grudgingly paid only after Diane threatened mutiny if I didn’t get it. 😉

By the time we got back from our walk our picnic table was no longer in the shade. Fortunately, they had a ‘club house’ which was a converted garage with nice sitting areas so we hung out there for the rest of the evening. Diane had a chance to love on some more pups with one, Roxie, getting quite comfy on her lap.

The ATV rally must be quite an event as the campground got more crowded and noisy as the night went on. The fire pit was right outside our tent site but the crowd that gathered around the campfire were quite courteous and kept their voices down. The next day broke with a temperature of a mere 45ºF which was at least better than the 37ºF we had in Kremmling, CO 🙁 . Still, I was ready for warmer temperatures. The high for Cedar Break National Monument was only 66ºF plus winds so we decided to change our plans … because we could.

Apparently no trip can be without a visit to a BMW motorcycle dealer. Diane needs a part for her bike and since Las Vegas has the nearest dealer that’s where we are headed. Rather than taking I-15 (boring) we are going in a roundabout way, with the first destination being Cathedral Rock State Park in Panaca, NV. From there the plan is to head south towards Las Vegas. 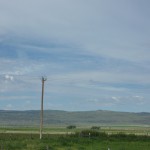 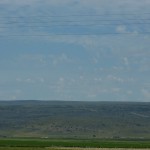 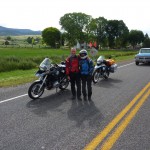 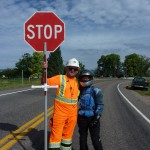 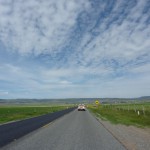 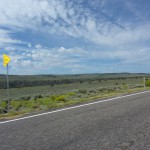 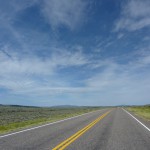 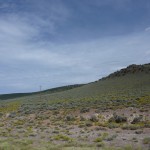 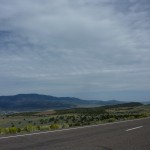 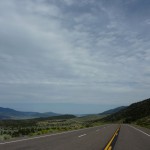 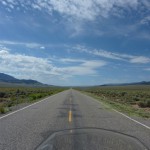 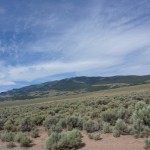 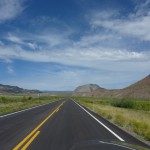 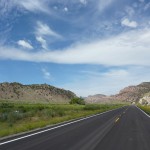 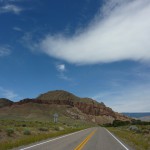 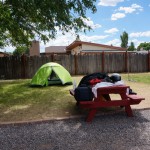 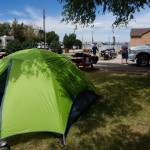 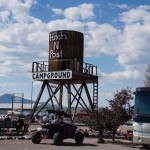 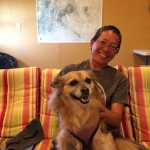