The big task for the day was getting the bikes ready. Although Diane’s bike isn’t scheduled for another oil change for 3k miles we decided to do go ahead and change the oil since that will extend our time on the road so we don’t have to worry about it (6k miles). My bike calls for a valve check/adjustment at 12k miles. Same theory, I only have 10k on the odometer but doing it now will mean I’m good for 6k miles.

One additional outstanding item was seam sealing the tent. With todays tents that’s a lot less work than in the past since many of the seams are already ‘tape’ sealed from the factory – a flexible translucent tape strip covers the stitching and is bonded to the nylon, sealing it and avoiding water seepage (capillary action and all that good stuff) in the rain. Our tent (Nemo Losi 3P) only had a couple of locations that ‘required’ sealing (being overly anal I suppose) – namely, items that were attached after the seam had been tape sealed. Picked up some seam sealer at REI – first looked at the liquid stuff in a bottle with a sponge applicator but then found SeamGrip by McNett which received a ‘Backpackers’ award a couple of years back, it puts down a nice layer of urethane, very similar in look and feel to the seam tape.. The only item was the tent fly which we turned upside down and then adjusted taughtly over the aluminum poles. This allowed me to seal the velcro attachments that wrap around the aluminum poles with guy-out points on the outside of the fly, so you can really tie down the tent for severe weather. After completing the sealing in the morning we moved into the garage to work on the bikes.

Diane worked on her F650 changing the oil while I worked on my R1200, watching an instructional video on how to check and adjust the valves. In order to test the completeness of the tool kit we are bringing with us we only used the tools in it to see if we could do this. Found out that I was missing a spark plug socket and a 24mm(!) socket for the oil drain plug on Diane’s bike. Worked progressed nicely until the valve adjustment instructions called for an 8mm wrench. Hmm. I had 9mm all the way to 22mm, but no 8mm. Crap. Stopped cold in my track. We finished up work on Diane’s bike and decided to run some errands.

The quest was to find a single 8mm wrench without having to buy an entire set. I’ll save you the suspense, it didn’t happen since even Sears, though they had all other sizes in the single wrenches, were out of the 8mm. Figures. So a cheap set of wrenches at Wal-Mart that included a 6,7 and 8mm wrench it was. I already have a nice set of Craftsmen wrenches for all those wrinkling their nose at Wal-Mart wrenches so I didn’t want to spent that kind of money again. I’ll get a single 8mm Craftsman wrench when they are back in stock – didn’t have the luxury of waiting.

Once again, the day went by in a flash. By the time we got back home, three hours had passed, we were starving and beat. Not many pictures. Just a taste. I’ll take some more of the valve adjustment when I finish up tomorrow. 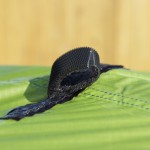 strap on the top of the tent 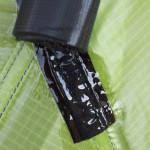 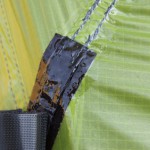 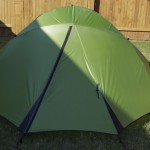 Tent fly inside out 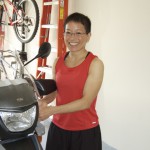 Diane taking off the plastic siding on her bike, starting her oil change 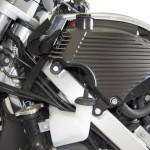 left side of F650, with side panel removed revealing the oil reservoir 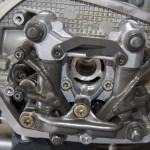 Ailien two toed feet? No. Valve train on a BMW R1200GS – also known as a ‘hex’ head for the shape of the cylinder. The shear number of torx screws is a dead ‘BMW’ give away 🙂 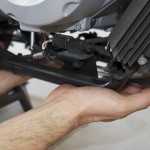 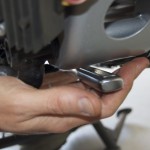 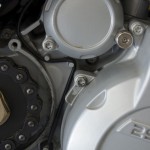