Amazing how dependent we’ve become on the internet. We always feel crippled with our planning when we can’t check the weather app for where we’re headed or Google maps to verify distances. Our first stop was to get to Ft. Nelson to get online to decide how far we could get today as well as restock groceries.

The ride to Ft. Nelson was short coming out of the mountains back into gently rolling hills terrain. After rains the night before, the weather was crisp but the sun was out and, for once, we didn’t wear our heated gear but rather an extra layer under our jackets. Temps hovered between 65ºF – 73ºF and we both removed our extra layer when we got to Ft. Nelson. While I went into the Sav-on grocery store to restock Diane made some calls to hotels in Fort St. John.  We originally picked Pink Mountain as a potential stopping point and camp spot as we weren’t sure if we’d make it all the way to Fort St. John. Just to be on the safe side Diane inquired about rooms at various hotels, all good, rooms were available.

The further south we rode the darker the sky became. A quick stop to put back on the layer of clothing we had taken off in Ft. Nelson and we headed into the rain.  It was intense with thunder and even a few streaks of lightening in the distance but, thankfully, relatively short. With the rain behind us we stopped for gas in Buckinghorse River, waiting our turn at the pump. And we waited and waited….probably a good 30-40 minutes until it was our turn. All the time we were anxiously watching the weather we had just ridden through head our way again. After that momentus wait it turned out there was another gas stop just a few kilometers down the road – very unusual and why it’s recommended not to pass up fuel stops once your tank is half empty.

We have noticed that the website depictions and reality don’t always agree when it comes to lodges and campgrounds. The web pictures only show the nice angles and shots, cutting out the not so nice parts. This was the case with Pink Mountain, not that nice plus more rain projected in the PM and next day so we decided to push on to Fort St. John.

Besides the high side winds the last hour of riding making you feel as if you were in a washing machine, we made it safely into the town by 16:00. First we checked out a $60 Howard Johnson. Yikes. Leaving the parking lot I spotted a Best Western that looked new and nice from the outside so we headed over. They had availability and with Diane’s Best Western rewards program membership we received 10% off the rate. Good enough. All the other nice hotels were in the same price range $95 to $110 USD. Our room came in at right around a $100. Once checked in and liking the place plus needing a down day and the rain forecast for the next day we decided to stay two nights. 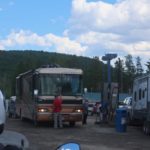 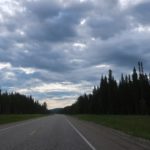 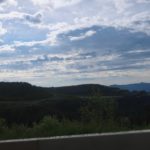 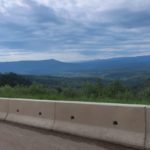 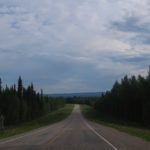 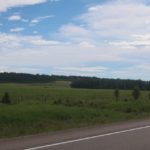 think we are going to get rained on 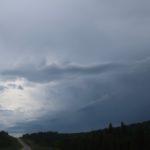 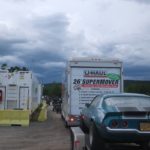 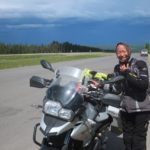 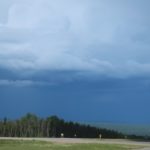 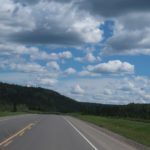 ‘normal’ road as we get closer to Fort St. John 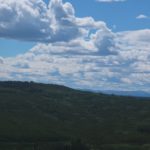 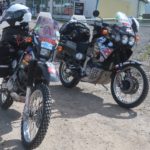 couple from Japan with stickers from around the world