Lots of dew over night made for a wet tent to pack up. Given the chilly temperature in the morning other campers were probably wondering, “what are those two guys doing, holding their coffee/tea mugs and standing like statues in the sun?” – trying to warm up since the campsites are usually shaded in the AM and ours was no exception.

The ride out of Stewart was just as picturesque as the ride in. Blue skies and sunshine for the day, or so we thought. We ride through pine and some Aspen forest along lakes framed by mountains. Just beautiful. Gas stops are few and far between so you have to pay attention to your gas consumption and available gas. Thankfully, the province of B.C. makes it easy with a sign that informs you how far the next gas stop is away.

Rest and gas stops usually have us moving around, walking, not standing still in order to deny the mosquitos a chance to settle down and sting. Some hand waving is also involved. Funny, we seem to be the only ones doing this dance.

As we progress towards Dease Lake, our stop for the night, we can see clouds building in the distance, merging into a solid dark mass. Not good. No re-routing on this highway so on we go. As we ride into Iskut for gas, the rain starts and stays with us all the way to Dease Lake.

Rain by itself wouldn’t be so bad but about 35km south of Iskut they ran out of paint for the road markings. They just suddenly stop and although we are still riding on blacktop, it’s not quite wide enough for two lanes (you can see the three ‘ruts’ or tire lanes in the road). The road becomes noticeably rougher and we are seeing more ‘Loose Gravel’ signs on top of the rain.

We hit one half mile section of packed dirt and gravel down the mountain and many spots where the section of gravel spans the entire road but is only maybe 30-60 feet long, a band across the street. This gravel is noticeably looser. Thankfully, there are (usually) warning signs that such a section is coming up though they missed a couple :-o. Pucker factor as you’re riding and suddenly have to slow down hard before hitting the gravel. We were going way below speed limit as it was due to the conditions but still not a pleasant surprise. Iskut to Dease Lake was an intense hour of riding.

Hotel time for sure or so we thought. Both hotels in town are fully booked so we head to a campground out of town since the next viable option is another 3.5 hour ride to Watson Lake, YT – no thanks, it’s already been a long day. The campground, Water’s Edge Campground, has a camping spot but no potable running water (except in the trailer of the owner) and only pit toilets – a big ‘no no’ for Diane. Not a good situation but after a quick talk we agree that it’s better than the prospect of riding to Watson Lake. Thankfully, by this time it has stopped raining so we grab the camping spot (more people are arriving after us) before that option went away as well.

What’s the big deal about the ‘no pit toilets’ rule you may ask? Pit toilets by themselves while not great aren’t that bad – we use them during the day while stopping in the rest areas. However, when camping, pit toilets signal no washrooms and potentially no running water as well. No washrooms means no washing your hands and no dental hygiene which, with Diane’s braces, is a little more involved process that’s not fun to do at the picnic table. Just spitting out the toothpaste foam when finished isn’t a good option since you don’t want to litter the campsite for the next person. We made due and called it an early night. 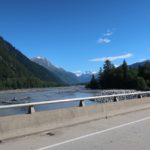 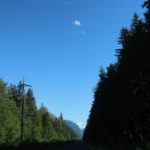 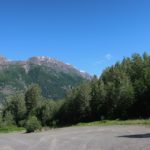 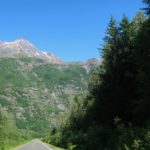 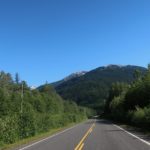 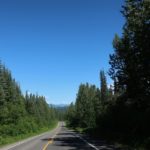 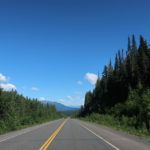 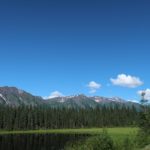 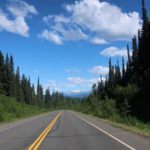 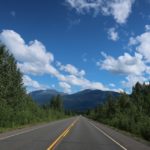 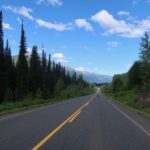 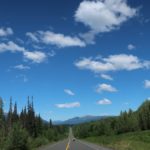 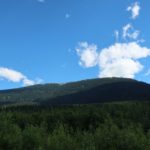 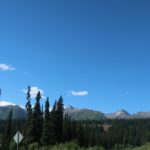 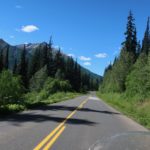 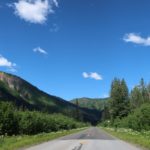 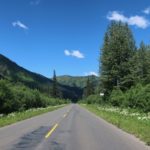 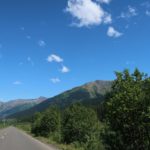 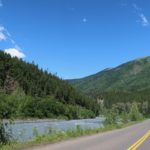 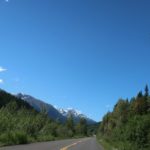 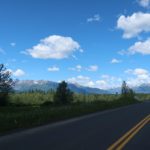 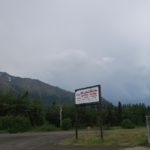 Rain catches back up with us in Iskut, BC 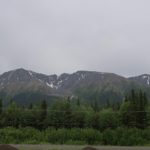