Placed the order by calling Dennis Kirk on the 13th, asking for them to hold the items for pickup. I didn’t get an order number which made me nervous and so paranoid me calls back to get another person on the line just to confirm that indeed my order is in their system and ready for pickup on the 14th at 9:30. My hyperactive brain was just playing out scenarios where I would show up at the pick-up counter and the person there going ‘What order?’ and the whole plan falling apart in an instant with us now having to wait until Tuesday to get service (dealer is closed on Sunday & Monday) and having to spend three nights in a hotel instead of just one. Yet, that’s me ;-).

Turns out the Dennis Kirk in Rush City is over an hour north of the dealer. Not quite as easy of a stop over as it sounded. Riding time from our campground to Dennis Kirk was predicted to be 1:45 plus another good hour to the dealer. That meant an early start for us, i.e. leaving the campground by 7:30. Just packing up and going isn’t really an option for me because without coffee the day will not go well. So, wake up by 05:30. I have to make coffee for me and tea for Diane. Making some oatmeal (soaking in hot water while we have our morning drinks) does not take any longer. We did our morning routine but with today’s time schedule in mind we made it out of the campground by 7:30 as planned. Another ride with heated gear as it was only 45F (7c) when we left but with no wind it wasn’t too bad.

We were cutting across the state from Little Falls, MN to Rush City, MN which took some creative routing courtesy of the google phone app. After some gas and pee stops and construction delays we got to the pick-up window just before 10:00. Thankfully, it wasn’t busy so a quick in-and-out and we were on our way south on Interstate 35. We thought (wrongly) that traffic wouldn’t be so bad on the weekend. Hah! No such luck. Stressful riding as usual because trying to stay together requires unsafe following distances or having cars change lanes in between the two of us.

Zack, who I had spoken to on the phone, was super nice, took the parts and bike into the back and we parked ourselves in the waiting area. What a relief. Time to get comfortable and break out the electronics because it would probably be a while. I didn’t care, we got in and we’d leave with new a chain and sprockets. After our hotel fiasco in Rawlins, I got on the bike and checked out a potential hotel for the night, Home2 Suites by Hilton. Asked the clerk if they would price match internet pricing, said they wouldn’t so just got on my phone in the lobby and booked the room through Priceline. Easy peazy. That taken care of, I stopped by REI to pick up more cooking gas (after two failed attempt to buy the cartridge at Walmarts – empty shelves).

So. In retrospect, I take some responsibility for this unscheduled stop. I failed to properly read the signs of a sprocket and chain on its way out while getting ready for the trip. Thinking that with 13k miles the chain had plenty of life left (confirmed by Chad and online resources) since life expectancy of said chain and sprockets is usually between 20-25k miles. Why only partial? Because if i had bad chain maintenance practices my Suzuki Vstrom 650 which has even more miles on it would show the same signs of wear, but it doesn’t so part of the ‘blame’ goes to poor quality OEM components (hello BMW).

What have I learned you ask? Basically, even if not at the end of its life, replace wear and tear items before long trips, even it it means throwing away some money. In the grand scheme of things though it’s a minor dollar amount. The new chain and sprockets cost $200. Let’s be conservative and say I had replaced them before the trip at 50% of their life, that would mean I ‘wasted’ $100. Pfft. That’s less than the one hotel night caused by the unscheduled service, not to mention the inconvenience and stress caused by all of this. 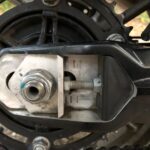 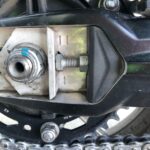 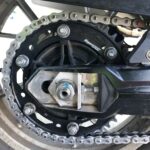