Today was supposed to be a rest day. We had a leisurely start to the day, made another cup of coffee and had camping chairs assembled before I started to make more calls to BMW dealers about a chain & sprockets replacement. Best I could get was next Wednesday the 18th until Zack from BMW Motorcycles of Richfield (greater Minneapolis area) called me back. It was an interesting conversation.

He started off by saying he had the parts sitting around for his own F800GS (the more off-road version of Diane’s bike, but otherwise very much alike) but thought he might have ‘geared the bike down’ – i.e. a smaller front sprocket for more torque. He needed to check later in the afternoon. The kicker was that he said that Dennis Kirk (motorcycle parts and accessories supplier) in Rush City had a pickup window so if his parts didn’t work out I could place an order with Dennis Kirk, pick up the parts and bring them in. That’s a first for me, a dealer letting you bring your own parts.

It gets better. Not only could I bring my own parts but he could fit me in tomorrow, Saturday the 14th. Wow, he said the dealer prides themselves on helping out travelers like us that need help. Damn, I wanted to hug the guy :-). I probably repeated everything he told me a couple of times to make sure I understood correctly.

A quick google map lookup indicated it would take us about four hours of riding (with breaks closer to 4.5 hours) to get to the dealer the next day. While that’s doable, it’s a long ride when under a time crunch. We decided to get closer to Minneapolis to shorten our riding time and get to the dealer earlier especially since they are only open until 16:00 on Saturday. We found an available campsite at the Charles A. Lindbergh State Park about 125 miles further SE. Unfortunately, that meant no rest day after all, pack it all up again and leave Bemidji around 13:00.

Winds were around 15mph and manageable and not that bothersome. Ride was OK, with most traffic heading North for the weekend. Nice state park, even had paved roads to the campsites. Although not available when we booked, we managed to upgrade to an electric site, too. We needed to recharge electronics and our power brick. 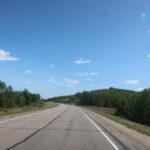 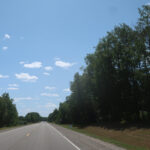 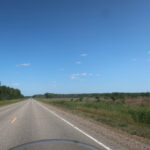 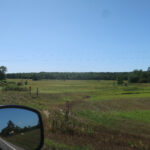 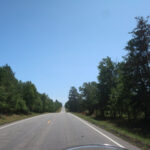 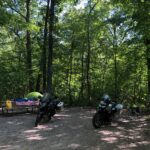 camping spot in the woods 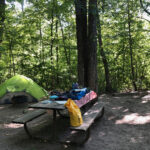 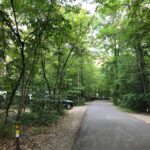 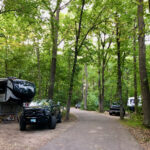