The forecast kept getting worse. The rain chances seemed to go up hourly when we were looking at them in the evening. When we woke around 5:00 it was 100% with ominous bands of thunderstorms moving across the greater Minneapolis area from West to East.

We had a brief shower and then a reprieve which I used to make coffee and breakfast before the serious rain moved through. And boy did it rain. We waited until 10:30 when the rain had mostly stopped to break camp, leaving the park at 11:30, half the day gone. Thankfully, the next destination, Kilen Woods State Park was only 3.5 hours of riding away. Sounds clip from inside the tent while it’s raining hard.

Today we had rain, high winds again and just towards the end of our ride with less than ten miles to the state park, gravel – trifecta. State police had blocked the road (due to a house fire as we later learned) and was routing traffic over a county gravel road. Thankfully, only for three miles. Still, not something you want to ride at the end of the day. Again, Diane did great, hauling butt, thought she was going to pass me ;-).

First order of business when we arrived at the campsite was to take out all our soaking gear (mostly the tent fly) and let it dry out. Everything was routine until I went to check on Diane’s bike and take the daily picture of the dribbling radiator fluid that had started again about a week ago – yes that dribble that was the cause of our delay and water pump repair.

Well, now, instead of the tell tale white residue coolant leaves behind there was a shiny trail of something. I touched it, looked at my finger (black) and realized it was oil coming out of the weep hole. Really! WTF. Why is the seal on the engine side failing? That immediately soured my mood and pegged the worry meter and killed the enjoyment factor.

Quick note: My understanding of water pumps is that they live in two worlds so to speak. Obviously on the coolant side to help circulate it but it is driven by the engine (the oil side) so there are two seals to keep the coolant and engine oil in their respective places. The weep hole straddles both sides so coolant as well as engine oil can get out to let the owner know something is wrong.

A quick call to the dealer in Scottsdale, AZ that did the repair led to ‘bring it to a BMW dealer to look at’ recommendation. BMW warranties its repairs for two years so if a part failed it would be covered, including labor. I called the dealer in Minneapolis that had helped us with sprocket and chain installation but they were now booked solid. That was the last dealer I could reach before 18:00, closing time. Had a call with Chad that eased some of my worries plus doubling back to Minneapolis to find a BMW dealer when I wanted to get home didn’t seem like a good idea.

While I was talking to Chad, Diane had located two dealers further South and along our route home. Bak Motors in Sioux City, IA and one in Omaha, NE. More calls to make the next morning. No, I’m not anxious at all that there is oil coming out of the water pump weep hole. Me, worry? 😉

puddle (already smaller) after the rain

so shiny, but not good 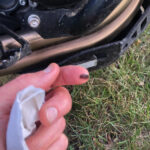 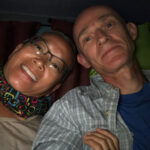 waiting for the rain to end 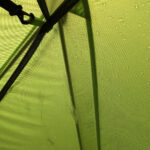 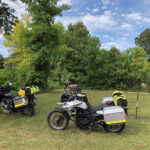 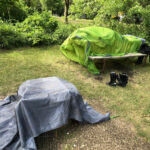